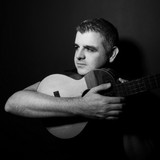 An excepcional venezuelan composer and cuatro player who earned the Bachelor of Music Degree in Composition from UNEARTE (Experimental University of the Arts) Venezuela. He has shared the stage with very acclaimed musicians. He is a founder member (2000) of the venezuelan music ensemble “Los Sinvergüenzas”. His work with “Los Sinvergüenzas” has already been included in four recording productions. In 2010 he won the 2nd Prize at the Composition Competition “José Fernandez Rojas” in Spain, with his work “Suite Latinoamericana” for Plectrum Orchestra. Hector belongs to “C4 Trío” (2005) along with Jorge Glem, Edward Ramirez and Rodner Padilla. With C4 Trio he has recorded six albums and a DVD and has been nominated five times for the Latin Grammys and has won two; in 2014 as "Best Recording Engineering for an Album" for the album "De Repente" and in 2019 as "Best Folkloric Album" for "Tiempo al tiempo". Also with “C4 Trío” he has been nominated twice for the Grammy Awards in 2018 with the album "Pa Fuera" and in 2020 with "Tiempo al tiempo". With “C4 Trío” he maintains an intense concert schedule in the most important theaters and festivals in North, Central, South America and Europe. In 2018 Héctor release his first album called "Giros", where some of the most important Venezuelan musicians participate and where he shows more of his role as a composer.