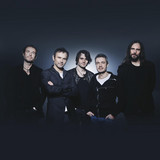 One of Ukraine's most popular, politically charged, and commercially successful rock bands, Okean Elzy (it translates to "Elza's Ocean") formed in 1994 in the city of Lviv by longstanding frontman Svyatoslav Vakarchuk after the dissolution of his prior group Klan Tyshi. The band spent their formative years establishing themselves on the festival circuit, and by the time they released their debut album, Tam, de Nas Nema in 1998, they were already a huge draw in both Ukraine and Russia. Subsequent albums like Ya Na Nebi Buv, Model, and Supersymetriya furthered the group's public status, and in 2003 Vakarchuk was named an official ambassador of Ukrainian culture. 2005's Gloria spawned four number one singles, and was followed by the equally popular Mira in 2007, Dolce Vita in 2010, and Zemlya in 2013. ~ James Christopher Monger, Rovi