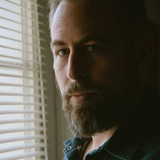 Tom Savage is what one might refer to as a triple-threat. One part truth-telling troubadour, one part death-defying guitar slinger, and one part Country Blues howler. Each facet of his formidable on-stage persona carefully crafted over a 20+ year devotion to the composition and performance of song. Tom is a true believer. A disciple of melody and harmony and tempo and timbre. An evangelist preaching to anyone who will listen of the healing and meditative powers of music. Pouring his heart out of his throat every night, while simultaneously shredding his fingertips in his relentless assault on the beat-up 1966 Guild acoustic he adores. "subtly brilliant…highly recommended" - Winnipeg Free Press "Coming on like a rocking, later day Townes Van Zandt, Savage colors outside the lines with tales of those living beyond the margins. Every generation needs one who holds up the fun house mirror to the absurdities and this is a cult hero for our times"- Midwest Record Review "we are dealing with a brilliant poet and troubadour" - Country Jukebox "A contemporary version of a Canadian Bob Dylan" - Rootstime "Recommended to those who still believe in Roots Rock power and poetry" - Lonestar Time