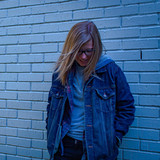 Born and raised in middle Tennessee, you’ll find Faith Holt: a singer songwriter making songs steeped in alternative emo and independent rock. The songs are self-realized depictions of the more difficult moments of existence. Topics include questioning religious beliefs, analyzing mental health, exploring the difficulty in relationships, and lingering over moments in time. The specificity of time is an early hallmark of Holt’s music. The singles released from 2015-2019 feel like journal entries. “August 1st,” watching “Fireworks” on the 4th of July, and then before you know it, in “Second Place,” it’s the middle of December again. Then comes The Difference. Still processing the same themes, still the same sound, but more fully realized. The arrangements on the record are sparkling and recall the previous grandeur of mid 00’s emo. The fear of finding happiness is the central theme of The Difference. It “focuses on the concept of the difference you feel and didn’t know existed prior to losing the happiness, paranoia the fall out will always come after finding it again, and also on the feeling of it being a cycle that seems to inevitably repeat.” said Faith of the record. There’s a moment in the title track when she sings “I’m afraid I’ll get used to this right before it ends. / That I just won’t get over it and there will be more to miss.” Faith's music is like a late night car ride with a close friend who knows you better than anyone else. And sometimes that friend is you.