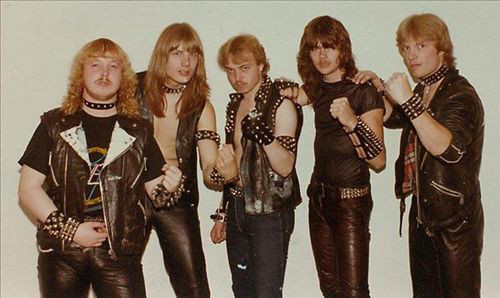 Artillery are a thrash and technical death metal band from Denmark. Since the 1980s they have, despite being ignored by American audiences, remained among the many quality European bands. Their riff-centric, knotty attack and clean vocals are a trademark sound that often stands at odds with the evolving production standards in the genre, but they've stuck to their guns. They signed to Metal Blade in the 21st century, and that seemed to pay off as listeners gravitated back toward earlier, more musical approaches. Unlike their peers, however, from Voivod and Megadeth to Coroner and Sabbat, Artillery have issued a slew of critically acclaimed recordings such as 1985's Fear of Tomorrow and 1990's By Inheritance. Live, they have always been well-received by European festival audiences. The constant evolution in their lineup (including three different lead vocalists) and the long hiatus between 2000 and 2007 didn't help, though; they had to rebuild their momentum almost from scratch. Undaunted, they soldiered on and have released acclaimed later offerings such as My Blood in 2011 (widely regarded as their best record), 2013's Legions, and 2016's Penalty by Perception, all while touring almost constantly. Formed in 1982 in the Copenhagen suburb of Taastrup by brothers Michael (guitar) and Morten Stytzer (bass), Artillery recorded demos that quickly became a hot commodity on the heavy metal tape-trading circuit. Then a booming worldwide network, this important underground community was also responsible for launching the careers of eventual giants like Metallica and Anthrax, who may have otherwise been doomed to obscurity. In Artillery's case, replacing original singer Carsten Lohmann with Flemming Ronsdorf proved to be the catalyst they needed, as the latter's very distinctive vocals (alternately gruff and piercing à la compatriot King Diamond) helped them to stand out from the pack. Rounded out by guitarist Jorgen Sandau and drummer Carston Nielson, the band soon inked a deal with British metal label Neat, which issued an influential couple of albums in 1985's Fear of Tomorrow and 1987's Terror Squad. All the while, the group toured throughout Europe on many package metal bills, including a lengthy jaunt sponsored by the Danish government that took them to the far reaches of the Soviet Union. Understandably, Artillery went down like a storm with the rock-starved Soviet kids, but authorities were less impressed, eventually sending them packing by way of one-way tickets on the Trans-Siberian Railroad. Guitarist Sandau quit shortly after their return and the band set about looking for a new deal with anyone but the troubled Neat Records, eventually signing with Roadrunner, for which they recorded 1990's ambitious By Inheritance in an attempt to break away from thrash metal's increasingly confined boundaries. New bassist Peter Thorslund was brought aboard at this time so that Morten Stytzer could switch to guitar, but with inner-band tensions escalating by the day, Artillery eventually split the following year. Little was heard from the band's alumni for the next decade, but when their influential early demos were packaged for release on 1998's Deadly Relics, Ronsdorf and the Stytzer brothers decided to attempt a comeback. Drafting drummer Per M. Jensen (later of the Haunted), Artillery returned in 1999 with the appropriately named B.A.C.K. LP, which -- modern studio techniques aside -- remained true to the technical thrash sound of their early days. The band officially ceased operations the following year, but re-formed again in 2007 after the release of a limited-edition four-disc box set called Through the Years. Longtime vocalist Flemming Rönsdorf did not participate in the reunion, so the band enlisted the help of a new frontman in Søren Adamsen, who would appear on 2009's When Death Comes and 2011's My Blood. Drummer Carsten Nielsen left the group in 2012, as did Adamsen, the latter of whom was replaced by Michael Bastholm Dahl. Dahl's first outing for the group, the Metal Blade-issued Legions, dropped in 2013, followed in 2016 by Penalty by Perception, also released via Metal Blade. After two seasons playing metal festivals on both sides of the Atlantic, the band re-entered the studio with revered metal producer Søren Andersen and delivered the Face of Fear in 2018 that resonated with an entirely new generation of fans -- many of whom weren't even born when the band began playing together. Two years later, Napalm Records issued In the Trash, a compilation of early demos recorded between 1982 and 1986. ~ Eduardo Rivadavia, Rovi