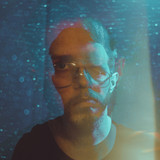 There is a certain resilience, albeit sometimes desperate to The Wealthy West’s songs. The solo moniker for The Rocketboys’ frontman Brandon Kinder, The Wealthy West sings songs that fully encapsulate someone who has chosen to step away from the comfortable, from his friends and easy relationships, and is trying to figure out his place in life. As if leaving the house with the door flung open and marching into the unknown, he periodically turns around to make sure that his real life is still there before plunging forward. However, along the way, and in search of a more personal voice Kinder took a handful of demos and released “The Wealthy West Volume 1”. As with The Rocketboys, these songs released in 2011 found much success with TV and film music supervisors, landing numerous placements and touching The Rocketboys’ fanbase. This success was followed with his first full-length, “Long Play”, which was an iTunes Best-of-2016 LP and featured fan favorites “The Highest Tide” and “That Silver Line”. Musically The Wealthy West sits between the storied troubadours of the 60’s and modern solo artists such as Bon Iver and Father John Misty; there is a gritty quality to his delicate voice - with just enough pain hidden behind fragile beauty to keep the listener guessing.