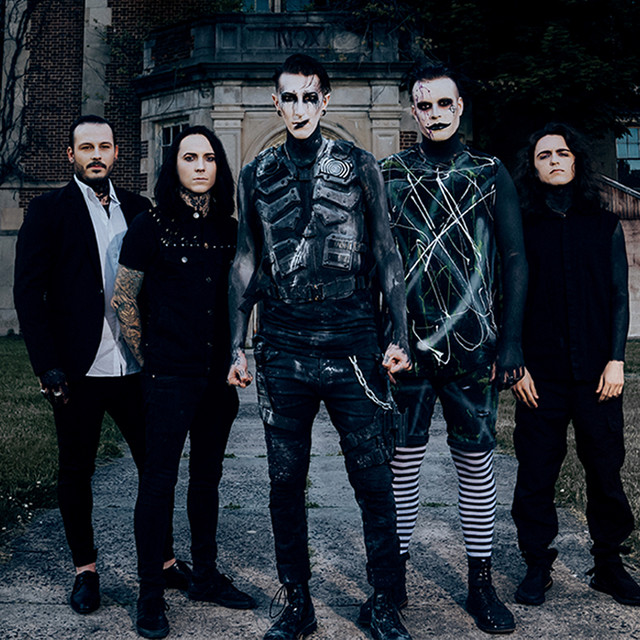 While their hometown of Scranton, Pennsylvania is mostly known in popular culture for being perfectly mundane, gothic metalcore band Motionless in White make music that's anything but tame. Blending the raw fury of metalcore with the dramatic atmospherics of goth-metal and industrial, the band has cultivated a dark and moody sound that owes as much to Type O Negative as it does to Slayer. Emerging in 2010, the group entered the mainstream four years later with the release of their third studio LP Reincarnate, which debuted at number nine the Billboard Top 200. Formed in 2005 while members Chris Cerulli (vocals), Angelo Parente (drums), Mike Costanza (guitar), and Frank Polumbo (bass) were still in high school, they become a quintet after the addition of keyboard player Josh Balz in 2007, the same year the band would release their debut EP, The Whorror, on Masquerade. In the years following that release, Polumbo and Costanza parted ways with Motionless in White, with Ryan Sitkowski and Ricky Olson coming on board to fill in the gaps, allowing the band to forge ahead after the release of their second EP, When Love Met Destruction, on Tragic Hero in 2009. The group signed to Fearless Records in 2010, and their first full-length album, Creatures, arrived that year, followed by their sophomore effort, Infamous, in 2012. A third album, Reincarnate, arrived in the summer of 2014. In June 2016, the band announced their signing to Roadrunner Records. They released the single "570" the same day. At the beginning of 2017, Balz announced his departure from the band. His synth duties were taken over by Marie Christine-Allard for the recording of the band's fourth set, Graveyard Shift. Issued in May 2017, the album featured the singles "Rats" and "Loud (Fuck It)," as well as an appearance by Korn's Jonathan Davis. The group headed back into the studio the following year, returning in 2019 with their fifth studio long-player Disguise. ~ Gregory Heaney, Rovi