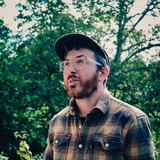 Message To Bears is the musical alias of English folk/electronic composer and multi-instrumentalist Jerome Alexander.   In 2007 Jerome self-released his first set of home recordings (simply titled EP1) which sold out almost instantly thereby catalysing a conversation with the then newly-formed Dead Pilot Records about a re-issue.   Having discovered a commonly-shared ethos, Dead Pilot Records and Alexander decided to work together again for Message To Bears’ second release (Departures), an album which was overflowing with lush strings and saw the first introduction of voice into Jerome’s recordings.   In the summer of 2009, Alexander played his first Message To Bears live show in Oxford with the help of his close friends playing a wide variety of instruments. They have since shared the stage with artists such as Nils Frahm and Ólafur Arnalds.   January 2012 saw the release of 2nd LP ‘Folding Leaves’ through Dead Pilot Records (UK) and Nature Bliss (JPN).   Jerome released an electronic EP under the alias J.R Alexander during December 2012 through Sound In SIlence Records and has gone on to self-release 3 more LPs under the name Message To Bears, 'Maps', ‘Carved From Tides' and ‘Constants’ as well as a collaborative EP under the name HIN - Warmer Weather.