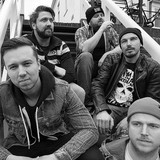 Filthy Felons is a post-hardcore band from the city of Utrecht in The Netherlands. They have been growing ever stronger since starting out in 2014, playing heavy hitting tracks and making crowds throw down wherever they go. They're influences contain bands such as Every Time I Die, Comeback Kid, Feed The Rhino and Thrice and they blend this together to form a mix that is both raw and melodic. Since playing live shows they have been playing shows one after another, which started creating a buzz and increasing their presence in the Dutch heavy music scene. They've released they're first EP in 2017 with producer Daan Nieboer of hardcore band '18 Miles' and are now preparing for the recording of their first full length album from which the first single has just been released called 'Weakness is a Magnet'. The new track gives a glimpse of a heavier side of Filthy Felons and songs to come. In the mean time they are touring around Europe to get their name out there.