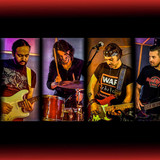 Lead by the creative vision and songwriting of frontman and founder Sepp Osley, London four piece Blurred Vision are a band set out to break the confines of genre based music. Blending electronic sounds with ancient rhythms and melodies on a foundation of a hard hitting rock 'n' roll band, stylisticly described as a mashup of Depeche Mode meets Muse, 80's Bowie meets 70's Pink Floyd, the group are taking their lessons from legendary heroes not to mimic but to create a new and infectuous contemporary style and path of their own With the announcement of a new live lineup, Blurred Vision are on the verge of releasing their second album, produced by Terry Brown, and are preparing to take fans on a new musical journey. Album two will make your hips move, your mind think, and your heart feel - It is a contemporary ride through the genre breaking, multi layered world of Blurred Vision's new sound! The new lineup sees the addition of Bentley Levy on bass, Jake Bradford Sharp on drums, and Jake 'Jakey boy' Libretto on guitars.