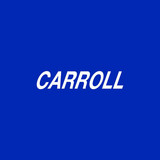 An indie rock four-piece, Carroll aren't named after a woman but St. Paul's Carroll Avenue, the place where the members of the Minneapolis-based band met in 2011. Featuring Brian Hurlow, Max Kulicke, Charlie Rudoy, and Charles McClung, the group debuted in 2012 with the self-released EP Needs. Demos for their debut album then landed in the hands of producer Jon Low, who brought the group to E1 Entertainment. The label released the band's Low-produced and self-titled debut album in 2015. ~ David Jeffries, Rovi