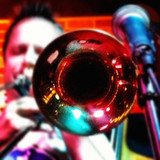 Jim Lutz plays trombone, bass, and keyboards in the greater NYC area. Jim also composes and produces music for a wide variety of clients around the world, and for his Bandcamp page (jimlutzmusic.bandcamp.com), Patreon page (patreon.com/jimlutzmusic), and YouTube channel (youtube.com/jimlutzmusic). Originally from central Michigan, Jim has appeared on stages, in recording studios, and on TV in dozens of cities around the world including Los Angeles, London, Tokyo, Paris, and of course New York. His credits include Disney, Cirque du Soleil, and the TONY® and EMMY® award-winning production "Blast!" Jim earned his master's degree in jazz studies at the University of Southern California after serving for 2 years as a teaching assistant in the USC jazz department. He also earned a bachelor's degree in music education from Central Michigan University. For more about Jim, check out his official website at www.jimlutzmusic.com.