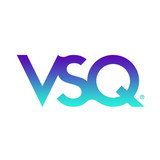 Active since 1999, Vitamin String Quartet (VSQ) has helped establish classical crossover as a force in contemporary music. One of the most popular contemporary string ensembles in the world, VSQ has “reached a mainstream, global audience” (Variety).

VSQ have produced over 300 releases of string renditions of an eclectic mix of artists, including their longstanding VSQ Performs the Hits series. The quartet also performs the work of notable artists on a full-album basis such as Lana Del Rey, Björk, Sigur Ros,and the music of Studio Ghibli. VSQ’s music has appeared in high-profile TV shows such as Netflix’s Bridgerton, HBO’s Westworld, Showtime’s Shameless, and ABC’s Modern Family. VSQ features a rotating cast of musicians and producers and frequently collaborates with like-minded creators and artists. Their collaborations with ThatViolaKid, Simply Three, Disney, 30 Seconds to Mars, and DoodleChaos have been major successes.