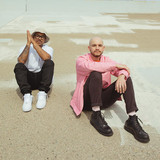 In an age where the realms of electronic music have become completely saturated, true musical integrity and originality are fast becoming the key indicators of success. Good Times Ahead have these characteristics in abundance, and at the mere age of just twenty-six, the Miami-born DJs/Producer duo Matt Toth and Julio Meija have managed to build nothing short of a remarkable musical empire.   Whether it’s their own original song, remix, or collaborations with some of music’s A-list artists, Good Times Ahead have continued to receive support from both fans and the ‘who’s who’ in the music industry. Whether it is their hit ‘Intoxicated’ with Martin Solveig (which went top 5 on UK charts), their Diplo assisted single ‘Boy Oh Boy’ that garnered over 86 million Youtube plays, their genre bending collaboration with Rick Ross on ‘Movin Bass’ accumulating over 18 million plays on Spotify, their remix of Rihanna’s ‘BBHMM’ with 6 million plays on Soundcloud or being enlisted by the prominent Rick Rubin on his Star Wars: Headspace compilation, Good Times Ahead have truly positioned themselves as new-wave tastemakers and are paving the way for genre-less music to stand at the forefront. With all this under their belt, critical acclaim has organically poured in from the likes of Pitchfork, The Fader, Complex, Hypebeast, GQ, Huffington Post and many more.