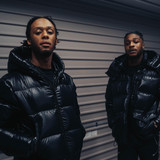 Young T & Bugsey met aged 15, having been aware of each other’s DIY recordings on separate sides of the city. When they eventually linked up, first as part of a collective before zeroing in on their chemistry as a duo, they quickly found themselves to be on a similar level, musically and otherwise.   Since then, breakout singles ‘Glistenin’, ‘No Mickey Mouse Ting’, ‘4x4’ and underground smash ‘Greenlight’ have further helped establish them. In 2018, Young T & Bugsey featured alongside Fredo on the Gold selling record ‘Ay Caramba’ and then quickly followed that up with the infectious singles ‘Again’, ‘En Route’ and ‘Living Gravy’ featuring Not3s. After being shortlisted for the MTV PUSH: Ones To Watch 2019, Young T & Bugsey continued steam-rolling ahead with more hits last year – releasing the Platinum certified, summer anthem ‘Strike A Pose’ featuring Aitch, which made it into the Top 10 of the Official UK Charts, and then following up with Official UK Top 20 hit ‘Don’t Rush’, feat. Headie One. With their long-awaited debut project ‘Plead The 5TH’ out now, Spotify UK’s first ever RADAR artists from Nottingham are set to have a huge 2020 ahead!