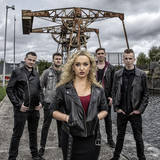 Beginning in 2017, Scathed are a 5 piece metal band based in Dublin, Ireland. Fusing their varied influences with elements of post-rock, Scathed have carved a niche for themselves and present a fresh take in the arena of modern heavy music. With a slate of Irish shows under their belt, the band have gone from strength to strength as a hard hitting and dynamic live act. Their aggressive charm alongside an array of eclectic bangers have landed them coveted support slots with various artists, including U.S rock legends Halestorm and U.K punk outfit, Hands Off Gretel. In 2019, Scathed released their first EP, "Where Truth Occurs", following up to their stand alone single, "Petrify", which was released the previous year. By late 2020, Scathed have fine-tuned their niche sound and reemerged with conviction, sharing their latest single 'Deceit’ a blistering new vision into the future of the band. The group offers their take on the affairs and failures of post-industrial society, addressing topics of mental health, conflict and injustice. “Scathed bring a fresh and new approach to the Irish metal/rock scene and have a live show that includes all the bells and whistles. Expect soaring vocals, crunching riffs and solid bangers” -Overdrive Media, 2019