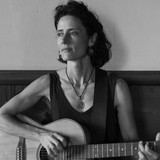 Pennsylvania-born songwriter Diane Cluck began playing her own songs as part of the burgeoning New York City "anti-folk" scene in 2000. Alongside like-minded performers like Kimya Dawson and Regina Spektor, Cluck was a regular fixture at the Sidewalk Cafe, a hub for the freakier folk sounds happening at the time. Ever prolific, Cluck quickly self-released a self-titled solo album in 2000, following up with nearly annual albums and countless collaborations. Important Records released 2001's Macy's Day Bird and 2002's Black with Green Leaves, as well as her inspired 2004 release, Oh Vanille/Ova Nille. Subsequent albums Countless Times and Monarcana followed as Cluck toured internationally and worked in collaboration with artists like CocoRosie and Herman Düne. Oh Vanille/Ova Nille was released on vinyl for the first time in 2010, and songs from the album found their way into the film Margot at the Wedding as well as the U.K. TV teen drama Skins. Cluck introduced a "Song-of-the-Week" series in 2011, whereby she delivered new tunes to subscribers via her website on a weekly basis. Her seventh album, Boneset, a ghostly and elegantly short set of tunes, was released in 2014. ~ Fred Thomas, Rovi