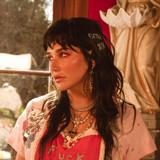 A brash and driven, Grammy-nominated pop singer and songwriter, Kesha went straight to the top of the Billboard Hot 100 in 2009 with her breakthrough recording, a feature spot on Flo Rida's "Right Round." Her own major-label debut, Animal, followed a year later and made her a bona fide star, reaching number one in the U.S. and Canada behind the international party-time hit "TiK ToK." The album spawned three more Top-Ten singles as well as the Get Sleazy Tour, her first as a headliner. A second solo number one, "We R Who We R," was included on the 2010 EP Cannibal, and she reached the Top Ten of the Billboard 200 for the third time straight with her second full-length, 2012's Warrior. A more rock-influenced effort, it found space for prior collaborator Wayne Coyne of the Flaming Lips, punk godfather Iggy Pop, and the indie pop band Fun. She had another Hot 100-topping single a year later with "Timber," a collaboration with Pitbull. After a series of legal battles with her long-time producer, Dr. Luke, that involved claims of physical and emotional abuse and business-related mistreatment, Kesha returned with her third album, Rainbow, in 2017. Its themes of self-empowerment hit number one in the U.S., Canada, and across Europe. Kesha Rose Sebert was born in Los Angeles but moved to Nashville when she was four, where her mother -- a longtime songwriter -- had inked a publishing deal. (Over a decade prior to that, Pebe Sebert's biggest success had come with "Old Flames Can't Hold a Candle to You," originally recorded by Joe Sun and later by Dolly Parton.) Before finishing high school, Kesha returned to L.A. for the sake of jump-starting her own music career, despite being set up to study psychology at Columbia. She soon met Dr. Luke, the co-writer and co-producer of Kelly Clarkson's "Since U Been Gone" (among several other hits), who was impressed with her demo recordings. Kesha penned the Veronicas' "This Love" and later contributed background vocals to Britney Spears' "Lace and Leather," both of which were released in 2008. The biggest turning point came one year later, when she was tapped to contribute vocals to Flo Rida's Dr. Luke-produced "Right Round," a number one Hot 100 hit. Kesha subsequently signed to RCA, and her debut album Animal -- featuring collaborations with Dr. Luke, Max Martin, and Benny Blanco -- was released in early 2010. Animal proved to be a big hit, reaching the top of the Billboard 200 and spinning off the number one single "TiK ToK." The nine-song EP Cannibal appeared at the end of the year. Its single, "We R Who We R," became her second chart-topper, and "Blow" also reached the Top Ten. Cannibal was followed in 2011 by another stopgap release, I Am the Dance Commander + I Command You to Dance: The Remix Album. In 2012, she was called upon by rocker Wayne Coyne for The Flaming Lips & Heady Fwends, a collaborative album that partnered Kesha with Biz Markie on the track "2012 (You Must Be Upgraded)." Dr. Luke was back on board for her second official album, Warrior, but the more rock-influenced effort also found space for Coyne, punk godfather Iggy Pop, and the indie pop band Fun. Preceded by the Billboard Top Ten single "Die Young," Warrior was released in December 2012 and reached the Top Ten of the albums chart. Two other singles hit the Top 40: "C'Mon" and "Crazy Kids." Kesha toured North America in 2013 as part of a co-headlining bill with Pitbull, and the duo also recorded a single together, "Timber," which became Kesha's third number one hit. Early in 2014, she entered rehab for treatment of bulimia nervosa, a period that included writing and recording over a dozen songs for her third studio album. That June, she began a stint as a celebrity expert on the ABC singing competition Rising Star alongside Ludacris and Brad Paisley. In late 2014, Kesha sued Dr. Luke for an array of charges, including sexual assault, harassment, emotional abuse, and bad business practices; she also sought release from her contract with Dr. Luke's Kemosabe label. Although the courts initially rejected her claims, wide public support for Kesha caused Kemosabe to release her from her contract in early 2016. Her return to performing came in April 2016, when she took the stage at Coachella to perform "True Colors" during Zedd's set. The studio version was released at the end of the month. Following her own world tour in the summer of that year, Kesha returned to the studio to complete work on her long-awaited third LP, Rainbow. "Praying," its lead single, was released in July 2017, with the album arriving a month later; it debuted at number one on the Billboard 200. More singles followed, including "Learn to Grow" and "Woman," the latter of which hit the top of the U.S. Dance Club Songs chart. In January 2018, Kesha picked up two Grammy nominations, including Best Pop Vocal album for Rainbow, and Best Pop Solo Performance for "Praying." Later that year, she released the single "Here Comes the Change," which was used to promote the Ruth Bader Ginsberg biopic On the Basis of Sex. "Best Day," a cut for the Angry Birds 2 movie soundtrack, followed in 2019. A return to the joyful pop of her early career, fourth studio album High Road arrived in January 2020. Though its lead single "Raising Hell," featuring Big Freedia, failed to chart outside of Ireland, the album debuted at number seven on the Billboard 200. ~ Rovi Staff, Rovi