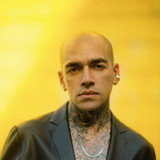 Ezhel is a prominent representative of hip-hop / trap culture in Turkey with a surprisingly fresh lyrical style that is fusing counter-culture and Anatolian city life. In May 2017, he released his first album “Müptezhel” in which he experimentally blends trap, hip-hop and reggae sounds. Even though this musical genre is not mainstream, his music managed to cross over genres and he became a favorite artist among listeners some of whom normally don’t follow rap music. In June 2018, he released his experimental trap track “Kazidik Tirnaklarla” (We Scratched with Our Nails) which was recorded in Berlin. Apart from its chart success, the importance of this track is that it symbolizes Ezhel's artistic explosion from Ankara to Berlin, from domestic to international career. The first week of February 2019, his next single “Felaket” (“Catastrophe”) hit the charts, following the release he went on his first European tour of 18 shows and sold them all out. In September 2019 he started to release singles with the top Dutch-Turkish rapper Murda, one of them, “Aya” became an infectious Afro-Latin-Trap hit and had a big chart success. In November 2019 he released a collaboration album with the top German-Turkish rapper Ufo361 named “Lights Out”. After releasing the collaboraton album with Murda, named “Made in Turkey” in 2020 and a string of solo singles in 2021, Ezhel is currently recording his next solo album in Berlin.