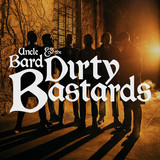 Uncle Bard and The Dirty Bastards

Folk/Rock music, spiced up with Irish Trad! Based in the north of Italy (weird, innit?) and made up of lads who, in one way or another, lived or spent too much time in Ireland! Too rock for the Folkies and too folk for the Rockies, the Bastards could please or disappoint almost everyone. Formed back in 2007, they play a unique blend of folk/rock and Traditional Irish Music. Uilleann pipes, tenor banjo, mandolin, Irish flute: there are few others bands in the folk/rock scene that could compete with the Bastards in terms of deep knowledge of

Irish Traditional Music and Irish culture and society. Uncle Bard & The Dirty Bastards has been the first Italian band ever playing at Dublin Irish Festival in Dublin, Ohio (USA), the most important Irish music festival in the United States, together with the biggest touring acts of the moment (WeBanjo3, Altan, Aoife Scott, The East Pointers, Socks in the Frying Pan and more…). In the last few years only, the band has toured internationally and played more than 400 gigs worldwide, including Rock the Ring and Toggenburg Irish Festival (Switzerland), Aymon Folk Festival (France), Sjock Festival (Belgium), Oranjerock in Netherlands, Paddy Wagon Festival (Germany)