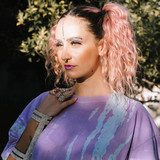 Whether her music has slipped into your consciousness behind hit TV shows including Fox’s Lucifer, The Royals, Wentworth, VICE, BULL, So You Think You Can Dance, Good Trouble, Mustangs FC, the trailer for VICELANDS’ World of Sports, the trailer for Black Market, Slutiver, Beerland, Reed Krakoff adds, or from her visually stunning live multi-media concerts, Lila Rose, aka ANIIML’s message is strong, her voice is quirkily recognizable, and her passion is contagious.

This Canadian born, LA based singer, songwriter, producer, film-maker and activist isn’t afraid to walk the edge in sound and in sight. Puking rainbows, gun to head, exploding animals, human road kill, a pregnant woman on a cross, a forest covered in recycled plastic… Lila will put herself in the way of comfort in order to bring her vision and message into the forefront. Lila has warmed the stage for acts such as MOBY, Emily Wells, Raury, Dreamcar, and Waka Flocka Flame, among others. She has produced and written for records for other acts whom have hence forth secured high profile sync placements for their music. The live show is a multi media experience which incorporates elements of performance art, dance, and theatre, featuring the three drummer band; Daniel Burdman on the electronic drums/guitar, Ryan Fyeff on the acoustic drums, and Lila Rose as their fierce, hypnotically “possessed” front person, and third drummer. *Lila Rose is also known as ANIIML.