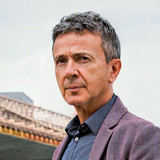 For more than 25 years, Enzo Ghinazzi, aka Pupo, has been making an impact upon the world of pop music. His first single "Ti scriverò" came out in 1975 and began a path to worldwide success that would lead to several hit albums and a host of awards including the Gondola D'Oro in 1981 for the album "Più di prima. His world tours have taken him to a number of well-known venues including Royal Albert Hall, Madison Square Garden, the Maple Garden in Toronto, and Paris' L'Olympia. His 1986 tour of the former Soviet Union stopped at historic theaters in Tallin, Leningrad, and Moscow, and helped build a fan base that lingers to this day. In 1989 he turned his attention to television, serving as the host of Italy's most-watched Sunday program, Domenica In. By 1991 he was back in the studio and on the road again, recording Canada's Wonderland and supporting it with a major Canadian tour. He then went on hiatus until 1995 when he entered the studio to record Pupo 1996. The hit singles "Senza fortuna" and "La notte" helped put him back in the spotlight. In 1997, Pupo put down roots in Italy and became a regular guest on the TV program "Va ora in onda". In 1998 he released "Tornerò", with a mixture of nine new songs and four classics with new recordings and arrangements. ~ Stacia Proefrock, Rovi