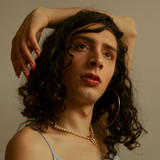 London-based contemporary pop gender-fluid artist, Andrea is what Paper Magazine defined 'The Next DIY Pop Star'; combining their catchy hooks to heartfelt lyrics, they have a unique sound 'that feels primed for the top of the charts'. Their music has been championed by The Line of Best Fit, Independent, Gay Times, Clash Music, Spotify’s “Fresh Finds” and Out Now playlists, and a number of online tastemakers. In 2020 Andrea started a new era with the release of pride anthem Stand Up , co-written with UK rising talent SXMSON, Miracle, the enticing collaboration with LA songwriter GESS (Shea Couleé, Drag Race) and the RnB/Pop jam Another Story cowritten with SXMSON which gained over 20k streams and was championed by Spotify's Cosmic Playlist. Their hit song Shame Resurrection has been synced for the brand new Netflix series Tiny Pretty Things Soundtrack Netflix and reached over 1 million streams across all platforms. After releasing the club anthem Leave It,