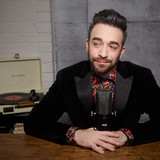 Award-winning jazz singer, songwriter and recording artist Ori Dagan is, quite simply, an original. His rich baritone voice and impressive abilities as an improviser produce an instantly recognizable sound. In live performance, he surrounds himself with Canada’s finest musicians, performing an engaging mix of material which is always fresh and in the moment. Dagan’s critically acclaimed releases “S’Cat Got My Tongue” (2009) and “Less Than Three <3” (2012) established a daring musical adventurer on the global jazz landscape. In recent years he has won numerous accolades for his witty original songs, from “Googleable,” his ode to a search engine, to the anthem for the rhythmically challenged, “Clap on the 2 and the 4.” The latter of these was screened at 15 film festivals worldwide, netting “Best Educational Jazz Short” at the inaugural New York City Jazz Film Festival. Dagan’s third recording, Nathaniel: A Tribute to Nat King Cole (2017 Winner: Silver Medal for “Best Album” at the Global Music Awards) is a unique homage to the legendary jazz musician and pop icon. The recording features 5 original songs inspired by facets of Cole’s life, music and legacy, with highly esteemed special guests Sheila Jordan, Alex Pangman and Jane Bunnett. In a career move as bold as Ori’s singing, “Nathaniel” is to be released as the first visual album in the jazz genre: a collection of 12 music videos.