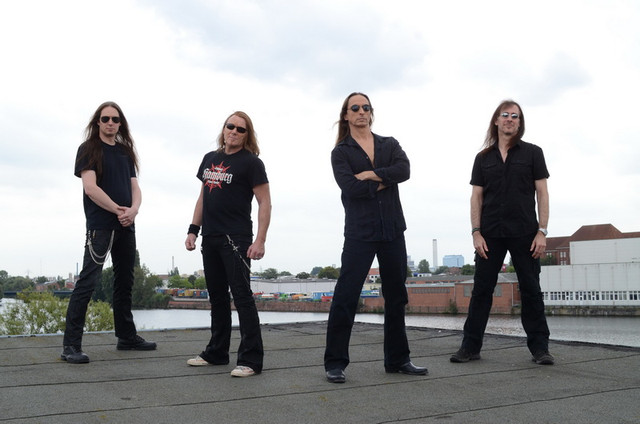 Kai Hansen formed Helloween in 1984, playing guitar and singing on the speed metal band's first four albums. He left in early 1989, however, and founded Gamma Ray with vocalist Ralf Scheepers (formerly with Tyran Pace). The duo intended to record a one-off project that Hansen originated while in Helloween, so they recruited bassist Uwe Wessel, drummer Matthias Burchardt, and several other musicians. The album, Heading for Tomorrow, was released in 1990 and proved a hit with fans and critics, so much so that Hansen, Scheepers, and Wessel decided to tour the album with added members Dirk Schlacter (guitar) and Uli Kusch (drums). During the tour the Heaven Can Wait EP was released. By 1991, Gamma Ray produced another album of new material, entitled Sigh No More. Following 1993's Insanity & Genius, vocalist Scheepers departed to try out for Judas Priest; he didn't get the gig, but opted to form a new band called Primal Fear rather than return to the fold, leaving Hansen to take over vocal duties on 1995's Land of the Free. Further recordings with Hansen as lead vocalist followed, including 1997's Somewhere Out in Space, 1998's Valley of the Kings, and 1999's Power Plant. Blast from the Past was released in 2000. Gamma Ray returned to a raging New Wave of British Heavy Metal style for 2001's No World Order, and followed that album with the live set Skeleton in the Closet. Gamma Ray returned in 2005 with Majestic, the release of which was accompanied by a world tour. In 2007, Gamma Ray released Land of the Free II (the sequel to 1995's Land of the Free), and went on tour with Helloween to promote the album. Three years later, the band released its tenth full-length album, To the Metal! In 2012, drummer Daniel Zimmermann left the group after 15 years. He was replaced by Michael Ehre. The band released their eleventh studio album, Empire of the Undead, which took the band's sound in a more thrash-oriented direction, in the spring 2014. ~ John Bush, Rovi