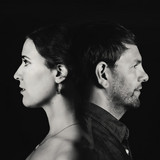 Featuring March to May

From Beth Wesche and Darren Guyaz’s first encounter around a roaring bonfire on the Washington coast to headlining sold-out shows at Seattle’s most prominent venues and touring throughout the U.S. and Europe, March to May has quietly become a group to watch in today’s modern folk landscape. They released their debut album Through the Night in late 2017, earning rave reviews from publications such as Glide Magazine, The Revue, and Surviving the Golden Age, and drawing comparisons to acts like Damien Rice, The Swell Season, Agnes Obel, and Florence + The Machine. Their album has consistently been on rotation on community and AAA radio stations across the United States, including PRI / NPR's Echoes program. The band layers mesmerizing harmonies and intimate lyrics over harp, acoustic guitar and piano, augmented by lush and atmospheric violin and cello, delicate drum patterns and electric bass. They continually push against genre boundaries to create a sound that is simultaneously familiar and foreign, integrating folk instrumentation with chamber pop and indie rock influences to create a cohesive sound that’s rich in color and texture.