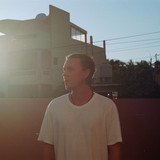 Montreal based indie collective The Franklin Electric share their latest EP Never Look Back. Recorded in Nashville and co-produced with Ben Cramer from Old Sea Brigade, the title track is about “moving forward despite the fear inside us,” says Jon Matte, who reminisces on a scary hike in Australia’s Blue Mountains where he felt completely frozen after discovering a new fear of heights After a successful 2019/2020 European & Canadian headline tour supporting the release of In Your Head / In Your Heart, Jon headed down to Nashville, to record new songs with Ben Cramer (Old Sea Brigade). As COVID-19 had just started creating shock waves across the world, The Franklin Electric’s studio recordings in Nashville came to a halt, forcing Jon to head back to Canada as international borders were closing down. Recording and mixing was finalized remotely between the US & Canada and few songs were able to see the light on the new EP Never Look Back. Aside from the title track "Never Look Back,” the EP features two previously released original singles: "Just Ain’t Mine," which speaks about not recognizing yourself within your own reflection, and “Spindle," a song about saying goodbye and letting go of people, places and things you've held onto. It also features four reimagined versions of songs from In Your Head / In Your Heart. For Fans Of: Old Sea Brigade, Ben Howard, Geoffroy, Arkells, Half Moon Run, Charlotte Cardin, Hayden Calnin, Sam Fender,