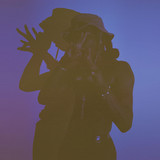 Raised in England, Hynes started out as a teenage punk in the UK band Test Icicles before releasing two orchestral acoustic pop records as Lightspeed Champion. In 2011, he released Coastal Grooves, the first of four solo albums under the moniker Blood Orange.

His album, Freetown Sound, was released to critical acclaim in 2016, and saw Hynes defined as one of the foremost musical voices of his time, receiving comparisons to the likes of Kendrick Lamar and D’Angelo for his own searing and soothing personal document of life as a black man in America.