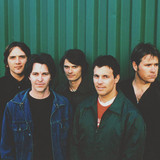 For so many Australians, Powderfinger have defined the moment: a love lost, a connection made, defiance, a life-changing party, an anthem that spoke directly to you, a ballad that hit your heart. For twenty years Powderfinger was the soundtrack to your life. Some may remember the heady days of the early ’90s, when they’d play bikie bars for a seedy rider. Others discovered Powderfinger in the sweaty mosh pit at the Big Day Out. Or you may have only found them in their twilight days, farewelling the band alongside thousands of fellow fans on their Sunsets tour. Whichever way you discovered them, Powderfinger burned their name across the Australian music landscape, clocking up 5 number 1 albums, 18 ARIA awards, 3 APRA awards and sales of more than 2.5 million albums. But that’s not what set them apart. The ambitious, honest, hard-working Brisbane band consisted of Ian ‘Hoggy’ Haug (guitar), John ‘JC’ Collins (bass), Bernard Fanning (vocals), Darren ‘Darius’ Middleton (guitar) and Jonathon ‘Cogsy’ Coghill (drums). They were successful, yet humble. Their no-bullshit, down-to-earth attitude, paired with their politically conscious lyrics made them accessible to people from all walks of life. That, and some f***ing catchy tunes.