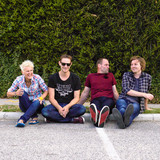 It was almost 23 years ago that Jebediah first shambled on stage in their shorts, sneakers, blue hair, dimples, grins and smirks and started bouncing off the walls with their roaring riffs and soaring pop hooks, tearing the lid off the Big Day Out and the Hottest 100 overnight.

It's impossible for an Australian of a certain vintage to imagine those late '90s summers without those delirious early Jebs singles — ‘Jerks of Attention’, ‘Leaving Home’, ‘Teflon’, ‘Harpoon’, ‘Animal’ — blasting out of every car radio and festival PA from Summersault to the Falls to Homebake. 23 years, six albums and piles of awards and acclaim later, the Jebs continue to captivate their devout fan base with their infectious energy and enthusiasm. There is no hiding the joy the band get from playing together and be it at packed pub or on a festival stage, it’s impossible to avoid their immersive charm. Jebediah celebrated their iconic 97' debut record 'Slightly Odway' in 2018, with a special limited run vinyl re-issue and will be re-releasing their 1999 classic 'Of Someday Shambles' on limited run vinyl, on Record Store Day, April 19th 2019.