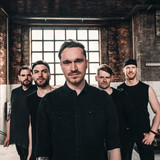 Bucket list - the list of things in life you want to do before going six feet under. And this is what Bucketlist thought about. In a melting pot of hard hitting rock, powerful metal and emotional ballads this band creates a musical road trip through life and invites you to join them. Bucketlist was formed in early 2016. After an initial touring period to grow together and releasing a first single the recordings of their first full-length album "Dust Has Settled" were finished in the first half of 2019. The album was born on the 16th of November 2019 with a successful release tour through some major cities in Germany. The tour was suspended due to the worldwide pandemic situation. In 2020 Bucketlist joined the Redlion Booking family and works hard on their next releases and prepares to enter the stage again. Pictures friendly provided by:Frank Tobian Photography, Jonas Hornei and Marie Fisher Photography.