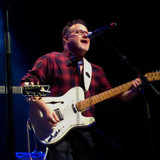 Eric Blakely grew up in the San Francisco Bay Area, California, USA. While John Fogerty and Creedence Clearwater Revival were

the local band that made it big, Blakely was naturally influenced by John Fogerty's playing. He was captivated by the mixed sounds of Country, Blues and Rock music. He attributes his early guitar influences to John Fogerty, Albert Lee, Rick Derringer and Richie Blackmore. As a young guitar student, Eric Blakely took a year of lessons from Joe Satriani. Indeed, before becoming the legendary guitarist we know. Then Blakely caught the composition and writing bug and, at the age of 17, founded his first band to play his own compositions. He recorded his first album at Hyde Street Studios in San Francisco with guitarist Dave Carpenter of The Greg Kihn Band producing. Blakely found himself in Paris, then Los Angeles, and finally packing his bags to Austin, Texas. . He quickly became a sought-after guitarist, playing with Calvin Russell, Pat Mears and several other local Austin Songwriters