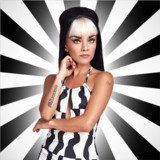 Swedish/Persian artist Jasmine Kara started her career as an 18 year old going to New York to perform in the subway and streets and knocking door on record labels. One day, after months of struggling with being broke, alone and unheard, she got lucky and Beyonce and Jay Z walked in to one of her performances out of the blue. A label in Sweden that had turned her down for years saw the selfie with Beyonce and decided to change their mind and sign her. Since Jasmine Kara´s career have been taking off, she has consistently been seen in Swedish media, done all the biggest TV shows in Sweden, had p3 gold nominations, performed at the Swedish Grammy awards, several playlisted songs on the radio, been featured in all the biggest magazines, and performed and toured allover Sweden and other European countries. Almost all the time completely independent. She has also been touring in Japan twice, had 2 songs on Tokyo Hot 100 list (top 10), made herself a known name in the Iranian market in front of millions of TV viewers and audiences through some of the biggest TV shows of Iran and featured several times on RadioJavan. In the UK she had a number one and five at the same time on iTunes Blueslist UK, toured there and done radioshows for BBC 2 and BBC 6, Sir Terry Wogan show etc. Today, she lives in New York, tours allover the world, releases music in 4 languages and have released a book sold out twice, albums with a lot of new music and new projects coming up.