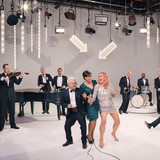 The eclectic, acoustic-oriented sounds of Pink Martini have never been easy to categorize, but that hasn't prevented the Portland, Oregon-based band from acquiring a loyal, enthusiastic cult following. Pink Martini have offered a risk-taking blend of jazz (mainly swing), world music, cabaret, lounge, and '40s-'50s film music, with influences ranging from Cole Porter and Duke Ellington to French icon Edith Piaf to Latin greats such as Xavier Cugat, Beny Moré, and Tito Puente.

Music from around the world has also inspired them, including French chanson, Afro-Cuban salsa, Argentinian tango, Brazilian samba and bossa nova, Italian folk, Greek rembetiko, Middle Eastern music, and Asian music. Impressively, Pink Martini's lead singer, China Forbes (b. April 29, 1970, Cambridge, Massachusetts), has performed in at least ten different languages, including English, Spanish, Italian, French, Portuguese, Greek, Arabic, and Japanese. In 2004, Pink Martini founder/pianist Thomas M. Lauderdale (b. July 14, 1970, Oakland, California) articulated the band's global outlook perfectly when he said: "I think it's important to be a citizen of the world as opposed to being a citizen of this particular country. Part of that means studying other people's languages." Lauderdale formed Pink Martini in 1994, hiring Forbes as the band's lead singer the following year. Neither Lauderdale nor Forbes is a native of Portland; Forbes, who grew up in Cambridge, met Lauderdale when both of them were attending Harvard University in the late '80s (she graduated in 1992). And Lauderdale lived in California and Indiana as a kid, although he spent his teens in Portland and moved back to Portland not long after graduating from Harvard. Forbes recorded a solo album, Love Handle, in 1995, but Pink Martini quickly became her main focus. Other members of Pink Martini have included Gavin Bondy on trumpet, Robert Taylor on trombone, Phil Baker on acoustic bass, Nicholas Crosa on violin, Brian Lavern Davis on drums and percussion, Timothy Nishimoto on percussion and vocals, and Derek Rieth and Martín Zarzar on percussion. Pink Martini's debut album, Sympathique, was released on their own independent label, Heinz Records, in 1997; they went on to release their second album, Hang on Little Tomato, on Heinz in 2004 and their third album, Hey Eugene!, on Heinz in 2007. The following year, Heinz released Forbes' second solo album, '78, which was a major departure from her work with Pink Martini and favored an introspective adult alternative approach along the lines of Natalie Merchant and Sarah McLachlan. The year 2009 was a busy one for the band, with the concert DVD Discover the World: Live in Concert, which showed how Pink Martini spent most of their 2008, arriving that summer and the album Splendor in the Grass, which featured collaborations with Chavela Vargas and the Dandy Warhols' Courtney Taylor-Taylor, appearing that fall. In 2010 they released the swellegant holiday album Joy to the World, which featured revered Japanese singer Saori Yuki. The band collaborated with Saori again on the following year's 1969, a collection of interpretations of that year's most memorable songs. Sessions for their sixth release began in January 2012 and included a cover of Charlie Chaplin's "Smile" featuring Phyllis Diller, who sadly passed away that summer. The results, Get Happy, arrived in 2013. Pink Martini then collaborated with Sofia, Melanie, Amanda, and August von Trapp, the great-grandchildren of the von Trapp family, whose escape from the Nazis inspired The Sound of Music. Dream a Little Dream, a mix of standards and original songs, was released in March 2014. That August, the band mourned the passing of conga player and percussionist Derek Rieth; a memorial drum parade was held in his honor that September. In 2016, Pink Martini returned with new music in the form of Je de Oui!, which included guest appearances by Rufus Wainwright, Ari Shapiro, and Ikram Goldman, and featured the group's first forays into Armenian and Xhosa music. Also included on the album was the single "Love for Sale," a distinctive rendition of the Cole Porter classic. ~ Alex Henderson, Rovi