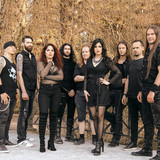 MaYaN was conceived in early 2010 by versatile musician and EPICA mastermind Mark Jansen and old friend, ex-AFTER FOREVER keyboardist Jack Driessen with the aim to write an album in the style they always really wanted. Evolving from a project to a real band, MaYaN needed the perfect musicians to help achieve this and, to name just a few, EPICA drummer Ariën van Weesenbeek and guitarist Isaac Delahaye joined. Having mostly touring musicians in the band, MaYaN needs to sometimes rotate their line up to be able to continue doing live shows and deliver the highest quality on stage. However, among the MaYaN guest vocalists are Henning Basse (currently FIREWIND), Simone Simons (EPICA) and Floor Jansen (currently NIGHTWISH). Because MaYaN has always had a profound love for epic movie scores, the next logical step was to record a new album with a live symphonic orchestra. To make this happen, an IndieGoGo crowdfunding campaign was started in early 2018, with the aim of facilitating MaYaN recording their 3rd album »Dhyana« with a real orchestra. After successfully crowdfunding MaYaN chose The City of Prague Philharmonic Orchestra to partner with. This world-renowned symphonic orchestra is one of the most respected and recorded orchestras globally and is known for its work in cinematic features such as the Star Wars saga and Hannibal.»Dhyana« reflects on conceptual themes such as remaining aware of our thoughts, removing egoist tendencies and finding out who we truly are.