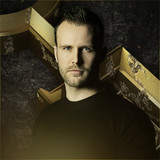 Hard, driving energy, sitting in the middle ground between euphoric and raw hardstyle – that is precisely what Aftershock stands for. An artist that has impacted the hardstyle scene from several angles with a unique and recognizable sound, Wesley Fanger, has been around the block when it comes to his genre. Since he stormed into the scene in 2019, his tracks have shaken dancefloors and entertained music lovers around the planet. Besides creating solo hits like “Light The Fire” and “Reaching For The Stars”, he’s collaborated with hardstyle top dogs Wildstylez and B-Front, and remixed the trance classic “Superstring” by Cygnus X. Now, the time has come to reveal his true self to the world, and to join the elite leagues of a new collective – Art of Creation. Aftershock’s mysterious identity has now been revealed to the world, and the time has come for him to reach his full potential. The mask is off; but the musical journey is only just getting started