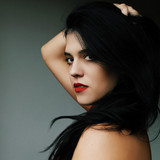 Maria Moss is a recording artist based in London. She mixes pop with Latin and Spanish influences. Through her songs, she gives messages of empowerment, strength and positivity. 'Gold' and 'Nah' are the first singles of an EP co-produced by Jamie Sellers (platinum-selling songwriter and record producer) and mastered by Pete Maher (Katy Perry, The Rolling Stones, Kelly Clarkson, U2). Recently, she has worked with worldwide known artist Cher, Mark Taylor (Enrique Iglesias), and Marco Dalla Villa (La Francesita). While working on her music career, she also writes and translates songs for other artists and producers. Since 2015, Moss has been writing, performing and developing her sound, lighting up industry interest (X-Factor, Universal Music Group, AEG Presents, OML, etc). She has played a number of international performances in Spain, the UK and the USA (LA, Chicago, and New York) and has played in legendary venues such as O2 Shepherds Bush Empire, The Ronnie Scotts Jazz Club, and Cargo to name a few. She has had media coverage in Spain, the UK, and Mexico. She has also got National UK & Europe radio play. BBC, BBC Introducing, La Cadena SER, Movistar + and tv3 (Spain) are a few examples. https://www.mariamossofficial.com