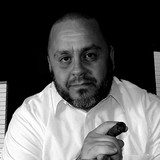 Towards the end of the 90's, Torrio recorded a single independently, which he was able to get into a national chain called Camelot Music. Finally he caught a break, and worked for a national record label called Rival Records, where he helped promote records by Men At Large, and Hip-Hop group S.O.S.C.

He eventually signed an artist development deal with Rival Records, and recorded several songs with the label. It was a wonderful learning experience, and he was blessed to be in the studio with many greats such as Dave Tolliver, Buddy Banks, and producers Simon Illa, and James Macon. In early 2001, he parted ways with Rival Records. Since then, he has released three nationally distributed albums that have gotten not only recognition, but radio play, award nominations and more. Each album he released was better creatively than the last. His albums featured many talented Cleveland artists, as well as nationally known artists such as Dave Tolliver, Big Mucci from 71 North, and Byron Nemeth.