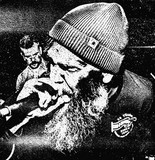 Sunset was born out of a necessity to protest. A forum for more than just themselves. A couple friends from Minneapolis aligned their beliefs and purpose; to start a band that needed to react to the ever-increasing threats of political and socioeconomic decline and to resist against a culture that is becoming more ignorant & complacent. With a sound in mind, they set ahead and although the search was difficult, the lineup was solidified. The debut EP is titled “Destroyer.” They are based entirely in Minneapolis and will play shows and tour when the world is ready again.