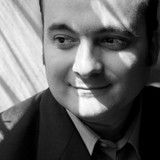 Harpsichordist, organist and musical director Marco Vitale was born in Palermo, Italy. After finishing studies in his hometown, he attended the Royal Conservatoire in The Hague where he studied harpsichord with Ton Koopman and organ with Jos van der Kooy, graduating with a master’s degree in Early Music. Throughout his career Marco has performed at the most prestigious venues and festivals throughout Europe, the USA, Canada, South America, the Middle East and Asia. He is the co-founder and musical director of Contrasto Armonico, an ensemble specializing in Baroque operas and the performance of music in the Italian style, using period instruments and historically informed performance practices. In 2012 he founded his own record label ayros, which features recordings by Contrasto Armonico and other artists. In a collaboration with ayros, Marco is currently involved in recording the Complete Italian Cantatas by Handel, a thrilling project that will bring to light many undiscovered jewels of Handel’s which have yet to be either edited or recorded. In 2018 he composed Il ratto di Helena, an opera in 17th century style based on a libretto written by Virgilio Puccitelli (1636). The opera was commissioned by The Palace of the Grand Dukes of Lithuania, and performed in Vilnius in celebration of 100 years of Lithuanian independence. Marco performs regularly with Jordi Savall’s ensembles Le Concert des Nations & Hespèrion XXI. www.ayros.eu www.contrastoarmonico.eu www.marcovitale.me