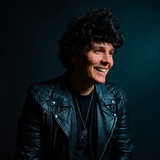 When a boy of just three years old climbs on a restaurant table and entertains the guests with his song and an imaginary guitar, something special is going on. This boy, Marnix Emanuel, was born and raised in the city of Amsterdam, as the oldest of four musical brothers and a singing sister. Marnix Emanuel started singing and playing guitar and piano at an early age. Together with his siblings, Marnix jammed day and night in the living room of his parent’s house. Soon after he began writing and composing his original songs. Feeling a strong need to create his own sound, Marnix locked himself up in his studio in Amsterdam. He continued creating and producing his music.  Years of work and dedication have resulted in a collection of beautiful pop songs. Marnix released his debut single, Right Through Me, independently. This ballad describes the vulnerability of performing artists on stage and of course these feelings Marnix has to endure himself. Within a few months, it reached over a million streams and the Viral 50 Dutch charts on Spotify. The track has not only been played on Dutch radio but Marnix also aced five performances live on air. On top, he made his TV debut on national television. In the meantime, two new singles of Marnix got released: New York a powerful pop-rock song, and You Are Amazing a beautiful love pop song.

For the past months, Marnix worked in his studio on new songs, that will release throughout 2021. An exciting year ahead for the artist!