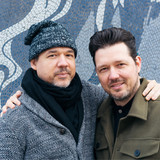 Born in East Berlin, the poly-instrumental composer duo Brueder Selke is considered an insider tip among music lovers. From icons like Mary Anne Hobbs to like-minded colleagues, there's hardly anyone who hasn't come to appreciate the subtle experimental yet accessible releases and special electro-acoustic performances of Sebastian on cello and Daniel on piano. Until now, the two have been working in secret under their alias CEEYS. Their works can be found on various labels and are regularly broadcast worldwide on radio and television. The joint musical meditation Thesis 17 with Peter Broderick and Daniel O'Sullivan has just been released as CONSTANT PRESENCE on Gregory Euclide's THESIS PROJECT. Collaborations are an essential element of the Selke brothers' work, which is why they have been developing their own concert formats since 2017. Their carefully curated annual Q3AMBIENTFEST has found a home in the film city of Potsdam, as have the brothers. After a year of uncertainty, a rework album with well-known and up-and-coming guests will be released again under the guise of CEEYS in autumn 2021. The idea of exchange remains and also determines their debut at the Ambient Festival: a mutual transmission shapes the evening on 11.09. between St. Aposteln, Cologne and the legendary Zionskirche, East Berlin, between Ambient Festival 1000 and Q3Ambientfest, with performances by Hauschka, Alvin Lucier's The Ever Present Orchestra, Ausklang and the brothers Selke.