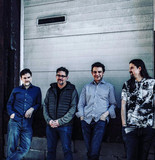 “Alan Zreczny is a force to be reckoned with, draping innovative chords and strumming with narrative poems that can swell from breathy intimacy to epic grandeur, often within the same tune." Radio One Chicago Local Music Radio Zreczny’s songs are narrative poems set to spirited melodies that he performs solo and with his band bluefront. Aftershocks is bluefront’s second release, a journey into the reverberation of emotional aftershocks. A Chicago native, the singer-songwriter first picked up a guitar at the age of 10. His love of music and writing remained under the surface while in school, while working at a large corporation and finally later at a law firm…but thoughts about creating music were omnipresent. “I always thought of being a musician and writing songs as the most fulfilling modes of self-expression.” And then a terrible break-up happened and Zreczny found himself filling up a notebook he had received as a gift, “much of which had to do with that relationship.” Not long after, Zreczny met Janet Bean (Eleventh Dream Day, Freakwater) at the law firm. The two became friends, and during one visit, she saw all the guitar paraphernalia and looked at Zreczny pointedly. “She asked me if I had written any songs and I mentioned the two. She asked to hear them". She told Zreczny his songs were beautiful, asked him to teach her the songs so she could play the at her next show and then asked him to join her and her band on stage. From there, it was no turning back.