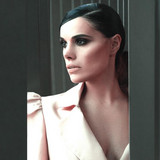 Vina Rose is an incredibly gifted singer, a natural vocal talent and sophisticated recording artist who is primed and ready to make 2021 her own. Born in Catania, Sicily, an island south of Italy, Vina Rose was immediately immersed in music and at just 4 years old, began singing on stage. By the time she was 14 she had already begun her career as an artist. Appearances on screen followed, including "Dancing with the Stars", "Top of the Pop", "MTV", "BBC" and "ITV", as well as a stunning appearance with Andrea Bocelli, and collaborations with various Radio Stations (105, Radio 2, Radio Italia) for original jingles and theme tunes. Releasing ‘Breathe Again’ in 2019, her debut single is a gorgeous and stirring introduction to an artist who has mastered their craft. As a taster of