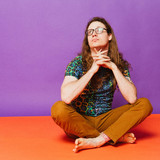 Nashville’s grasskingdoms is easily one of the more prolific artists we have in music right now. With over 60 singles under his belt, you cannot force grasskingdoms into a box, from party tracks to dancing cuts, from LSD laced instrumentals to somber tracks that will have you questioning your existence, grasskingdoms has sounds for every mood. His work ethic and musical knowledge is always on display through his entire discography. Over the course of the last couple years, grasskingdoms has brought singing and songwriting to the table adding yet another dimension to his already unique and diverse output. “I’m inspired by all legends,” grasskingdoms says, “David Bowie, Prince, Daft Punk, Pink Floyd and everyone in between. This statement holds more weight when you realize, grasskingdoms’ output is out of this world and each production taps into a new feeling every time. “Catchy upbeat disco inspired synth pop music with the occasional rnb track or ballad.” is how grasskingdoms explains his music. All of this came to a head in 2017 when he released his debut album “Atlas (To the Stars)”. While an instrumental album on the surface grasskingdoms reveals that the album is “conceptually revolved around an LSD trip”. “Atlas” captures all the ebbs and flows, the extraordinary highs and sinking lows involved during a trip. The roller coaster ride he takes the listener on fits perfectly with the plethora of singles grasskingdoms has released over his tenure.