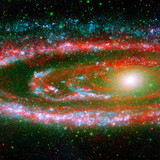 Ari Ross has been a composer most of his adult life, mostly concentrating in the Ambient/New-Age genres but also journeying to the land of "Dance" & "Techno" now and again.Aris side (okay, currently main) occupation is playing the role of voiceover artist who you may have heard as a promo announcer for game show "Who Wants to be a Millionaire?" as well as a regular voice for "The Tonight Show with Jay Leno" and other content. Some recent tracks include Sleep Cycles - Beginnings, Sleep Cycles - Glacier Sunrise, Halloween in Space & a joint project with the great Steven Cravis called The World Can Rise Again as well as a couple of dance tracks including Funky Phone and "Break it Down" which can be found on his album, Still Traveling. Aris's goal with his music is to create art that will uplift individuals to achieve greater peace and contentment as well as to inspire folks to do better both for themselves and the world around them.