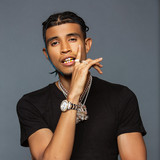 Based in the College Park area of Atlanta, Georgia, bilingual rapper Kap G kicked off his career with a series of high-profile collaborations. Born George Ramirez, the MC debuted in 2012 with the single "Tatted Like Amigos" featuring Chief Keef. "Jose Got Dem Tacos" followed a year later with guest Young Jeezy, then 2014 saw him drop three mixtapes including his breakthrough effort, Like a Mexican. In 2015 he released the single "Like El Chapo" featuring Ca$h Out, then signed with the Atlantic Records label, which paired him in the studio with Pharrell Williams. A year later, Young Thug and YFN Lucci landed on his El Southside mixtape. SupaJefe arrived in 2017, featuring appearances by Chris Brown ("I See You"), Dae Dae ("I Heard"), Kapfe ("CEO"), and Pharrell Williams ("Icha Gicha"). The next year, he joined Sofia Reyes and Paty Cantú on "Vamos por la Estrella," a single written for the Mexican national soccer team and their entry in the 2018 World Cup. ~ David Jeffries, Rovi