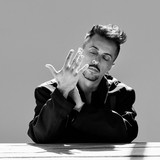 Dardust is a pianist, composer, and one of the most important producers of the new generation in Italy. His music has accompanied internationally renowned events such as the Superbowl and the NBA All Star Game. Author and exceptional producer has signed numerous great Italian hits, boasting a list of over 60 Platinum records. As a composer, he created the first Italian instrumental music project capable of uniting the minimalist piano world with the current electronic imagery of Northern Europe. It is a mission that crosses the geographic / musical axis Berlin - Reykjavik - London and from these places restarts for the drafting of a record trilogy. The trilogy started with the debut album “7” recorded at Funkhaus studios, characterized by that specific atmosphere and temporal connotation, continued in Island at Sundlaugin Studio and ended in UK with "S.A.D. Storm and Drugs” released on the international market in January 2020 by Sony Masterworks and Artist First.