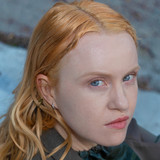 Moving to Perth from Liverpool with her parents (aged sixteen), KUČKA – inspired by Nirvana, PJ Harvey and similarly emotional guitar-driven music – started out recording songs on her parents’ computer. She began to perform throughout Perth, embracing the eclecticism of the city’s electronic music scene by changing up her sound from gig to gig. Her first release, a self-produced, written and recorded eponymous EP, was uploaded to Bandcamp in 2012. Over the following years, KUČKA has established herself as a standout producer and vocalist. She released a second EP (Unconditional) in 2015, which expanded her sound with more intricate compositions and mature song-writing. She has worked alongside a number of high-profile collaborators, producing and singing on tracks with artists as diverse as Flume, A$AP Rocky, Vince Staples, SOPHIE, Fetty Wap and Kendrick Lamar. In April 2021 KUČKA released her debut album 'Wrestling' to critical acclaim, with The Guardian describing KUČKA as 'a conduit for the most cutting edge sounds in the world' and NME including it in their '15 best Australian Albums of 2021 - so far'.