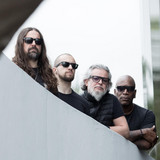 From their humble beginnings in Belo Horizonte, Sepultura became the most successful Brazilian heavy metal band in history. Over a ten-year period, the group grew from strength to strength, transforming themselves from a primitive death metal ensemble with early recordings such as 1987's Schizophrenia into one of the leading creative trendsetters of the international aggressive music scene by the time of 1989's Beneath the Remains. Their reputation was cemented in 1991 with the release of Arise. Sepultura's musical palette began to expand with 1993's Chaos A.D., where they experimented with old-school heavy metal and groove metal. After a long tour following the release of 1996's Roots, a bitter internal crisis ensued, and guitarist/vocalist Max Cavalera left; it split the band and Sepultura struggled to recover their momentum. In 1998, with American singer Derrick Greene replacing Cavalera, they issued Against and began to find their groove again. They issued six more albums before drummer Igor Cavalera left the group to reunite with his brother and form the Cavalera Conspiracy. After hiring drummer Jean Dolabella to tour in 2006, Sepultura again found their way, as evidenced by 2009's A-Lex, the widely celebrated Kairos in 2011, and Machine Messiah in 2017. Hailing from Brazil's third largest city, Belo Horizonte, Sepultura (which means "grave" in Portuguese) were formed in the mid-'80s, a period during which that country was beginning to emerge from a 20-year military dictatorship. Max Cavalera (vocals/guitar), Igor Cavalera (drums), Paulo Jr. (bass), and Jairo T. (lead guitar) had a hard time even finding rock & roll albums, especially those "socially unacceptable" genres such as heavy metal and punk. Their early influences were Iron Maiden, Metallica, and Slayer (literally the first three records purchased by Max on a visit to the "big city," São Paulo), but the band soon progressed toward a death metal sound, inspired by emerging groups such as Possessed and Death. Their drive and determination (they sang in English from day one) more than made up for their geographic isolation and inexperience, and though they were only in their teens and still learning how to play their instruments, the band quickly evolved into an underground contender. After landing a deal with independent Cogumelo Records, Sepultura recorded four songs for a split LP with fellow Brazilians Overdose. Reissued on CD and named for its first track, 1985's Bestial Devastation was self-produced and recorded in just two days, and it shows. Recorded with minimal time and money in August 1986, their first full-length album, Morbid Visions, showed little improvement but contained their first hit, "Troops of Doom," which attracted some media attention and convinced the group to relocate to São Paulo (Brazil's largest city and financial capital) in order to further their career. They also replaced guitarist Jairo T. with São Paulo native Andreas Kisser, whose greater musical ability would help take the entire band to the next level. In 1987, Sepultura's technical proficiency finally caught up with their creative vision, and their second full-length album for Cogumelo, Schizophrenia, displayed an incredible evolution in terms of production and performance. It also became a minor critical sensation across Europe and America, drawing the attention of Roadrunner Records, which promptly released the album worldwide and signed the band to a long-term contract. No longer restrained within Brazilian borders, the group set about composing 1989's Beneath the Remains, the first of four albums that would solidify Sepultura's position as perhaps the most important heavy metal band of the '90s. Recorded in Rio de Janeiro for Roadrunner under the guidance of leading death metal producer Scott Burns,

1989's Beneath the Remains was an immediate critical and commercial success, and the band's ferocious performances on the subsequent European tour further cemented Sepultura's reputation. The group also filmed their first video, for the single "Inner Self," and finished that year's tour with a triumphant set of shows in their homeland. After obtaining new management and relocating to Phoenix, Arizona, Sepultura entered Tampa's Morrisound Studios with producer Burns to record 1991's highly acclaimed Arise album. First single "Dead Embryonic Cells" proved to be another resounding hit, and the title track would gain even more attention when its video was banned by MTV America due to its apocalyptic religious imagery. The world tour that followed elevated the album to platinum sales worldwide (a figure rarely achieved by bands of such an extreme nature) and, in a strange twist, found singer Max Cavalera marrying band manager Gloria Bujnowski, who was almost twice his age. Such was the group's success that their label, Roadrunner, obtained a co-distribution deal with Epic Records for their next recording, 1993's Chaos A.D. By incorporating social issues (especially relating to Brazil) into their lyrics, as well as displaying some of their punk and hardcore influences for the first time, the record was another worldwide smash thanks to singles like "Territory" and "Refuse/Resist." After touring for over a year, the members of Sepultura took a well-deserved break before starting work on their most ambitious album yet, 1996's Roots. The introduction of native Brazilian percussion and musical styles into their trademark downtuned guitars and increasingly sociopolitical themes resulted in a highly unique record that could loosely be described as heavy metal/world music. Roots marked Sepultura's creative peak, and the group's continual rise to ever-greater fame seemed guaranteed until a family tragedy set off a series of events that would break up the band. Just hours before taking the stage at England's Monsters of Rock festival, the group discovered that the teenage son of manager (and singer Max's wife) Gloria had been killed in a car accident. A shocked Sepultura took the stage as a trio while Max and Gloria boarded the first plane back to America. Only a few months later, the band confronted Max about severing ties with Gloria and finding new management. Still recovering from the recent trauma of a death in his extended family, Max viewed this as a huge betrayal and left the band amid much bad blood and acrimony. As the group's creative leader, many expected his departure to spell the end of Sepultura, but the band announced that they would carry on and soon began looking for a replacement. After a long search, Sepultura recruited Cleveland native Derrick Green as their new singer and began laying down tracks for 1998's Against. Though it retained much of the intensity and diversity of its predecessor (including a collaboration with Japan's Kodo percussion ensemble on the track "Kamaitachi"), the album lacked the unique spark that had characterized the group's prior work. It also sold only half as many copies as Cavalera's first album with his new band, Soulfly, clearly showing with whom fan loyalty remained. Undaunted, Sepultura returned in early 2001 with Nation. The album followed in the footsteps of its predecessor, despite better reviews and a more seasoned Green on vocals. In order to reach out to their slowly shrinking fan base, the group released one of their last live shows with Max, Under a Pale Grey Sky, in the fall of 2002. An EP of covers, Revolusongs, was issued in 2003, followed by the full-length Roorback, 2005's Live in São Paulo, 2006's Dante XXI, and 2009's Clockwork Orange-inspired A-Lex. The following year, Sepultura announced they had signed to Nuclear Blast, where they would release 2011's Kairos (after which their drummer left) and their 13th studio album, The Mediator Between the Head and Hands Must Be the Heart, in 2013. This latter effort, inspired by the sci-fi classic Metropolis, brought an injection of fresh blood with the introduction of 20-year-old drummer Eloy Casagrande. It was produced by Ross Robinson, who had helmed their seminal album Roots. After a major tour, the reenergized band went back into the studio with Jens Bogren to record 2017's Machine Messiah. They remained on the road in support of the effort until 2019, when they barreled straight into another album cycle. The band's 15th effort, Quadra was issued in February 2020 and produced by Jens Bogren. The set was a four-part concept offering centered around the quadrivium of mathematics. With its entertaining intersections of prog metal, thrash, and death metal -- sometimes within the same song -- it marked a turning point in the evolution of Sepultura's sound. ~ Eduardo Rivadavia, Rovi